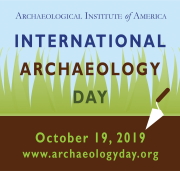 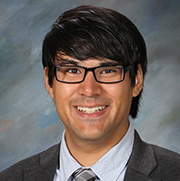 The Synagogue in the New Testament: A New Frontier in Biblical Archeology presented by Jordan Ryan, Assistant Professor of New Testament at Wheaton College, Wheaton, Illinois.

What role did synagogues play in the Gospel narrative of Jesus' life and ministry? Dr. Ryan has sought to open new avenues for interpretation and understanding of who Jesus was, as well as what he taught and how he lived, through a better understanding of one of the primary settings of Jesus' activities during his ministry: the synagogue. Read more about Dr. Ryan's presentation on the Archaeological Institute of America's IAD Blog.

”Real People of the Bible - What Archaeology Tells Us About David and more than 50 Other Biblical Characters” presented by University of Wisconsin alumnus Lawrence Mykytiuk, Purdue University.

Lawrence Mykytiuk is Associate Professor of Library Science and has a courtesy appointment as Associate Professor of History at Purdue University. He holds a Ph.D. in Hebrew and Semitic Studies from the University of Wisconsin and is the author of the book Identifying Biblical Persons in Northwest Semitic Inscriptions of 1200–539 B.C.E. (Society of Biblical Literature, 2004) and a related article, “Corrections and Updates . . .” in Maarav (2009).

Professor Mykytiuk's 2014 Biblical Archaeology Review article, Archaeology Confirms 50 Real People in the Bible, pushed the list to even more figures from the Hebrew Bible who have been confirmed archaeologically through his careful analysis. But that wasn't the end of it. "All told," he reported, "counting both published and unpublished results, I find 55 people in the Hebrew Bible and 30 in the New Testament whose historical existence stands documented in writings from their times."

Ten Seasons at Tel Gezer: Results of the Tandy Museum Excavation Project presented by Sam Wolff, a senior archaeologist with the Israel Antiquities Authority and co-director of the Gezer Iron-Age Gate excavation. Sam earned his Ph.D. in Hebrew from the University of Wisconsin and has spoken before our Society several times previously.

Sam first volunteered at Tel Gezer as a UW student in 1972 and 1973. After receiving his PhD and excavating numerous sites in Israel, he was invited to be co-director of a new excavation at Gezer in 2006.

They excavated 13 levels of occupation, with a number of destructions layers that testified to its border status. Gezer peaked as a city in the Middle Bronze Age. One of Gezer's rarities is a city wall in the early Iron Age period.

Professor Seales has developed a software program that digitally unwraps ancient scrolls that have burned to a crisp and are otherwise unreadable. His program successfully analyzed a computerized tomography scan (CT-scan) of a 2,000-year old scroll recovered from the 1970 excavation of a burned synagogue at En Gedi, an oasis on the shore of the Dead Sea in Israel. When the scroll was finally readable, it turned out to be the biblical book of Leviticus. He is also working on virtually unrolling carbonized scrolls recovered from the Villa of the Papyri at Herculaneum, burned but not destroyed by the eruption of Mt. Vesuvius in 79 A.D. Professor Seales' research was subsequently featured on 60 Minutes.

“Brent Seales has made a career of unlocking lost secrets. With specialized software he and his team developed, the University of Kentucky computer scientist can read ancient scrolls too fragile to unroll.”
- Discover magazine, May 2017

“Brent Seales has unlocked the text in the early Leviticus scroll from En Gedi — the oldest Pentateuchal scroll in Hebrew outside of the Dead Sea Scrolls.”
- Sci-News.com, September 2016

The lecture was presented at Upper House, on the University of Wisconsin campus, co-sponsored by the Stephen and Laurel Brown Foundation, with additional support from InterVarsity Christian Fellowship and allgodspeople.com, and also in celebration of International Archaeology Day, October 21, 2017. 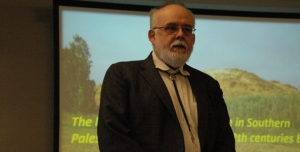 Other programs from our half-centennial year:

MBAS president Jeff Blakely gave a report on The Imperial Egyptian Presence in Southern Palestine in the 14th through 12th centuries BCE. This added new information to our understanding of this Canaanite period in the history of southern Palestine, when the Amarna tablets clearly reflect Egyptian hegemony. The presentation also included a brief update on the Tel el-Hesi regional project, with which he has been associated for most of the past half century.

Sidnie White Crawford, professor of Classics and Religious Studies at the University of Nebraska, spoke on The Qumran Scrolls As A Scribal Collection

Sidnie White Crawford has spoken before the society previously on her internationally recognized Dead Sea Scroll research; her topic in 2001 was "Not According to Rule: Women, the Dead Sea Scrolls and Qumran." This time she took a broader view of Dead Sea Scroll research and with some references to her latest project which argues that Qumran served as a library and scribal center in competition with the Temple in Jerusalem, and that the manuscripts found in the eleven caves at Qumran are the remnants of that library.

Dr. Crawford currently serves as Chair of the Board of Trustees of the W. F. Albright Institute of Archaeological Research in Jerusalem, the American headquarters for archaeological research in the Holy Land. This was her second lecture before the Madison Biblical Archaeology Society.

Joel Pless, professor of Theology at Wisconsin Lutheran College, gave a lecture on The People of Pompeii.

Pompeii was an ancient Roman city buried by the eruption of Mount Vesuvius in A.D. 79. It remains to this day one of the most valuable archaeological sites for learning about the daily life and times of a first century Roman city, a city of the New Testament era. Professor Pless described the sequence of events as the volcano erupted and buried the city under volcanic ash. He examined pictures of the plaster casts of the human victims of the Pompeii eruption in their final moments of life.

For information on MBAS or to join the email list to be notified of future MBAS events, contact MBAS secretary Gordon Govier. 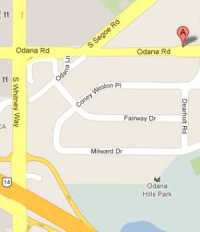 Westwood Christian Church faces Segoe Road but the entrance to the parking lot is at 5210 Odana Road. The church is located just two blocks north and east of the Whitney Way exit to the Beltline highway. The meeting will be held in the upper level auditorium. MBAS meetings are free and open to all, the public is invited.

MBAS has been active in Madison for a half-century. Professor Menahem Mansoor began MBAS in 1967, out of a desire to offer the public an opportunity to learn more about the development and significance of Biblical Archaeology. The Purpose of MBAS is to promote the knowledge of, and an interest in, Biblical Archaeology in the Madison area and throughout the state of Wisconsin.

Activities include lectures, field trips, and movies. MBAS also encourages its members to volunteer at archaeological excavations in Israel and adjacent countries. Members of the Society have participated in excavations in Israel and Jordan since 1976. MBAS membership is open to anyone who is interested in Biblical Archaeology. MBAS is a non-profit 501(c)3 organization, and contributions are tax deductible.


To find out about recent topics and guest lecturers, check the 1997-2016 MBAS MEETINGS ARCHIVE. For further information on MBAS activities or to contact MBAS, contact MBAS secretary Gordon Govier.